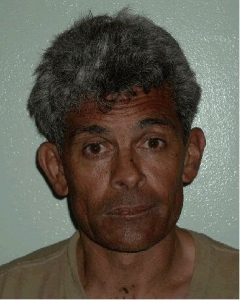 Jamestown, CA — The C.H.P. has identified the alleged vehicle thief that was captured near the Yosemite Junction shorting after 11am Wednesday.

At approximately 10:50 C.H.P. Officer Josh Mahaney conducted a traffic stop on a 1992 blue Dodge Dakota pickup for a cracked windshield and expired tags. Mahaney ran the vehicle’s plates and learned the vehicle had been stolen in the Waterford area earlier that morning.

Mahaney immediately called for backup. At this point 48 year old Frank William Martin of Modesto exited the vehicle and attempted to escape into the countryside south of Hwy 108/120.

Martin was quickly captured approximately one mile south of the highway, placed under arrest and transported to the Tuolumne County Jail.

The C.H.P. was assisted by Tuolumne County Sheriff’s deputies. A C.H.P. helicopter had also been contacted to assist in the search.