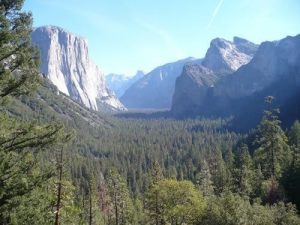 Yosemite National Park, CA — A 17 year old hiker from southern California had to be air-lifted from the Park Monday afternoon.

At approximately 3:30pm the Emergency Dispatch Center received a call regarding a collapsed hiker on the Upper Yosemite Fall Trial. According to Ranger Kari Cobb the unidentified youth from Upland, CA collapsed near the summit … a 3.5 mile trail that begins in the Yosemite Valley.

Two Yosemite rangers were dispatched to the scene to assist the hiker. A C.H.P. helicopter then air-lifted the youth to Children’s Hospital in Madera. The initial report indicates the 17 year old experienced a medical issue. He was not injured in any type of fall.