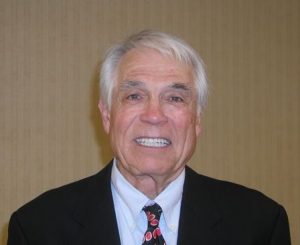 Kapp was the guest speaker at the annual Friends of Scouting breakfast held at the Sonora Best Western Conference Center Friday morning. Kapp says the community needs to support programs that help mentor young people, and says he particularly believes in the scout motto of “Be Prepared,” because he used the same philosophy during his football career.

Kapp was the Super Bowl winning quarterback for the Minnesota Vikings in 1969 and remains the most recent NFL player to throw seven touchdown passes in a single game.

Kapp is also credited as the architect of “The Play.” In 1982 he was the Head Coach of the Cal Bears and his squad used a five lateral kick-off return with :04 seconds left to defeat the rival Stanford. Announcer Joe Starkey muttered the now famous words, “The band is out on the field,” as many fans figured the game was already over.

Kapp, who still resides in the Bay Area, claims his team was prepared for that type of situation. During practice he would make his team run laps with a football, and the players would lateral it back and forth.

“‘The Play’ was not an accident or a miracle,” says Kapp. “It gave a good lesson though, as long as the game is in play, you never quit.”