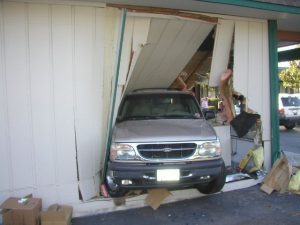 Sonora, CA — No one was injured after an SUV crashed into a business on Mono Way this afternoon

The CHP says 79-year-old Joan Francis Kneis of Twain Harte was attempting to back out of a parking space when her foot reportedly slipped off the brake pedal and onto the accelerator.

She then tried to steer her SUV. Kneis hit two vehicles and eventually ended up completely inside the building.

The accident occurred during the two o’clock hour, and caused considerable damage to the structure.

A similar incident happened last Thursday just down the street, when an 87-year-old Sonora woman crashed into the Jazz It Up Hair Salon on Mono Way.