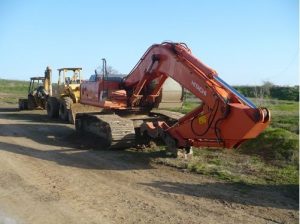 Sonora, CA — It’s been years in the coming but ground has finally been broken for the Lowe’s Home Improvement Center.

While no notice of a formal groundbreaking was issued by Lowe’s, the City of Sonora or California Gold Development Corporation, ground has been broken and power is now on site at Old Wards Ferry Rd. and Sanguinetti.

The Center will cover 111,200 square feet. In addition a 27,720 square foot Garden Center will also be constructed.

Scot Patterson of California Gold Development Corporation has estimated that it will take approximately eight months to complete the construction.

City Administrator Greg Applegate has estimated this will increase the city’s coffers by over $400,000 a year. Tuolumne County will benefit to the tune of approximately $500,000.

Lowe’s initially stated that 120 full time jobs will have to be filled.