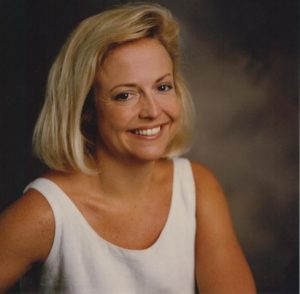 Mariposa, CA – The official obituary for Ethie Radanovich, wife of Congressman George Radanovich, has been released:

In a statement issued early Friday, Congressman Radanovich said, “Ethie was the love of my life. Her smile would light up a room and her boundless energy brought joy and beauty to everyone she met. Ethie truly lived life to the fullest always thinking of King and me and those she loved.”

Ms. Radanovich was first diagnosed with ovarian cancer in January 2007. She courageously battled the disease with her distinctive positive energy and courage.

Ethie, a former California political consultant, was receiving hospice care in the family’s home in Alexandria, VA, after courageously fighting the disease with the tenacity and grace that she exhibited in every aspect of her life.

Ethie Weaver attended the University of Oklahoma, where she was a member of the President’s Leadership Class and Pi Beta Phi sorority. After graduating from college, she moved to Washington D.C., where she worked for the National Republican Senatorial Committee.

In 1984, Ethie Weaver moved to San Francisco, CA, to join Woodward & McDowell, a consulting firm which specializes in ballot proposition campaigns. Over the course of more than 20 years with the firm, she successfully managed every level of political campaigns, public affairs and issue advocacy programs on both the national and state levels. Initially working out of Woodward & McDowell’s San Francisco Bay Area office and later heading up their Washington D.C. office, Ethie was the consummate coalition builder.

Former colleagues said she brought a seasoned know-how and a boundless well of energy to every effort, forging coalitions and friendships every step of the way.

A colleague at work introduced Ethie Weaver to the George Radanovich in the mid-eighties. They officially began dating in 1996, shortly after George became a member of the Republican freshman class in the 104th United States Congress.

In July of that year, Congressman Radanovich proposed to the beautiful Ethie while dining in Chez Michel restaurant, near San Francisco’s Ghirardelli Square. Weaver and Radanovich were married at St. Joseph?s Catholic Church on November 23, 1996, in Mariposa, CA.

In 1998, Ms. Radanovich gave birth to their only son, King. The depth of love and devotion felt for their son is captured in every family photograph. Though Ethie Radanovich succeeded at many things during her life, anyone that knew her would tell you that she was an amazing mother. Her son was the light of her life, and she showed him how much she loved him in everything she did.

Family and friends praised Ms. Radanovich’s “larger than life” personality and her ability to bring people together — people who arrived as strangers, left as friends. She was thoughtful and engaging and made everyone around her feel comfortable.

Two memorial services were planned so that the many friends on both the East and West coast can gather to celebrate the life of Ms. Radanovich. At noon on Thursday, February 11, a service was held at Good Shepherd Catholic Church in Alexandria, VA.

On Sunday, February 21, a second memorial service will be held at the Sierra Meadows Country Club located in the California district that Congressman Radanovich has represented since 1995.

Ms. Radanovich is survived by her husband, George, 54, her son, King, 11, and her sisters, Katherine Weaver Price of Oklahoma City, OK, and Sarah Weaver Niemann of Ponca City, OK.