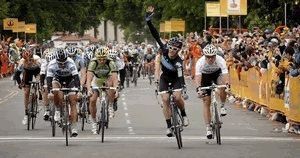 Sonora, CA– Next month, local officials are hoping to learn more about the actual route of this summer’s Amgen Tour through Sonora.

Miller says he does expect the race to start in downtown Sonora.

“It really depends on an area that can accommodate the hospitality tents and the start stage where the racers sign in and the pre-races are conducted,” he said. “We do want to share with the racers and everyone who will be watching, the whole historic character of downtown Sonora.”

“We will be developing a web page just for the Amgen Tour,” he said. “And that should be up by mid-January.  “And there’s already a Facebook page as well as a Twitter site.”

Miller adds that there has been a lot of buzz around town from local merchants and the community wanting to be a part of the Amgen event.

“We have different committee members that are working on sponsorships and fundraising activities and securing volunteer participation,” he said. “We will be planning a number of events leading up to the race day. It’s going to be just huge to showcase the county.”

Amgen Tour officials say Stage Four will start in Sonora and end in Clovis.  The 750 mile race will run from May 13-20.