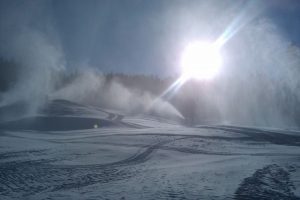 Three chair lifts will be in operation with four beginner and intermediate runs.

Dodge Ridge will open as soon as the snow has stacked up on the ground. Jeff Hauff of the Dodge Ridge Marketing Department says the forecasters are sticking by their assessment that this La Niña season will provide a large amount of snow and a long season into next year.

In an earlier report before Thanksgiving Amber Jenquin at Dodge ridge said “We are 100% ready to go. Once Dodge opens, our staff and facilities will be open for the season seven days a week.”