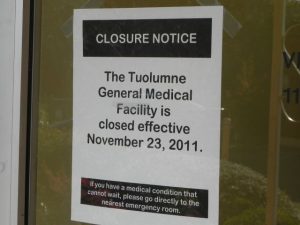 Sonora, CA — Tuolumne General Hospital locked the doors on November 23 after the final skilled nursing patients were transferred over to the expanded Avalon Care Center on Greenley Road.

CAO Craig Pedro gave a presentation on the history of TGH at this morning’s Supervisors meeting, and members of the Board read aloud letters of rememberance submitted by residents of the community.

The Supervisors gave special recognition to head RN Darlene Hieb, who spent over 30 years at TGH. She also helped lead the transfer of services to private sector over the past four years.

“Throughout her county career, Darlene has been the model of quality care, love, compassion and loyalty to both her patients and staff,” said Pedro. “She has exemplified the best of what has been offered at Tuolumne General Hospital.”

Supervisor Dick Pland served as a past Board liaison for the TGH trustees. Pland said, “Many of you have been down to the Giants ballpark in San Francisco, and there’s a statue down there of Willie Mays. If this county was in the business of building statues, we have our own Willie Mays as far as TGH is concerned, and it’s Darlene Hieb.”

The County Supervisors voted in 2007 to gradually phase out the services offered by TGH. Most have been picked up by Sonora Regional Medical Center.