Pland Will Not Seek Re-Election 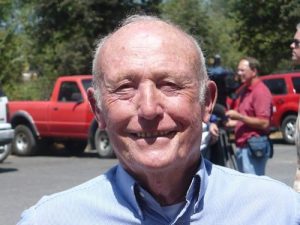 Jamestown, CA — Residents in the Jamestown and Columbia area will elect a new Supervisor next year.

Longtime District Five Tuolumne County Supervisor Dick Pland tells KVML News that he will not run for another term. Pland will soon be entering his 16th year on the Board of Supervisors.

“I think it is time for a change,” says Pland. “I’ve enjoyed it, and I think that I’ve represented the people the right way, both in the district and the county as a whole.”

“The time does come, where you call it good,” adds Pland.

The District Five race could draw a heavy field of candidates. Domenic Torchia, who challenged Pland four years ago, has sent out an e-mail to supporters announcing his plans to run. Jamestown Area Planning Commissioner Jim O’Neil also says he will seek the seat. Karl Rodefer of Columbia, a retired USAF Lt. Col., has also formed a committee and intends to run.

Candidates can take out paperwork from the county Election’s Office, and start collecting signatures, beginning December 30. The election is next June.