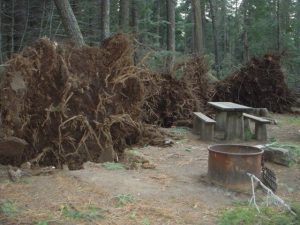 Arnold CA– Calaveras Big Trees State Park is closed until further notice due to extensive damage from the severe windstorm on December 1st.

The most obvious issue is what to do about the entrance kiosk that was split in two by a tree nearly three feet in diameter. The damage is listed in the photos provided by Calaveras Big Trees Association Board Director Sanders Lamont.  Lamont says a residence at the Park sustained damage to a bedroom but no one was injured.

The Visitor Center estimates 50 trees fell down in the North Campground,  a few fell on the North trail,  10 to 12 more are down from the parkway down to the river, and in Oak Hollow four to five trees have fallen.  Trees were also reported down in the South Grove.

No Giant Sequoias were affected but the size of many of the trees that fell were in the three foot diameter range and around 200 feet tall or taller.

Over the past week the park’s crew, other park district workers, the Vallecito Conservation Camp, the California Conservation Corps, and many volunteers have worked to clear fallen trees and debris.

The walking trail through the North Grove of Big Trees is usually maintained and kept open throughout the winter for hiking, cross-country skiing, and snow shoeing.

In December the Visitor Center is open on weekends 11 am to 3 pm and daily during winter break. The Park road to the Stanislaus River and the South Grove and all campgrounds are closed as usual until spring.