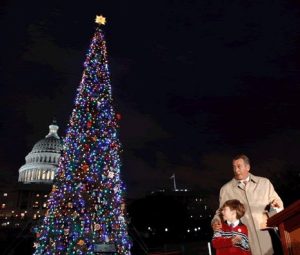 Tuolumne County resident Derek Maxson was in Washington D.C. on Tuesday night when the U.S. Capitol Christmas Tree was lit.

Maxson was KVML’s Thursday “Newsmaker of the Day”.

It was a nice coincidence for Maxson, who was on a business trip and realized that several familiar faces would be in town.

It was also a great chance to see the completed journey for the local tree. Maxson had witnessed the Christmas Tree Parade in Sonora and attended the festivities at the Motherlode Fairgrounds.

At the Tuesday night ceremony, in front of the U.S. Capitol, Maxson listened as House Speaker John Boehner gave a short but nice speech about Tuolumne County and the “Peoples Tree”.

Senator Dianne Feinstein also spoke about her pride in the tree and its role in showcasing California’s forests and natural beauty.

The Jazz @8 Choir from Summerville High School performed at the event.

The ceremony also featured Sonora second grader Johnny Crawford (along with his parents and sibilings) who had the honor of flipping on the light switch with Speaker Boehner.

Also on hand for the celebration were Congressman Dan Lungren and Congressman Jeff Denham.

After the tree was lit, there was a technical malfunction and the tree went dark for about five minutes.

Afterwards, Maxson was invited to an indoor reception at the Library of Congress where Jazz @8 performed again and more speeches were made by select dignataries. The atmosphere and surroundings of the Hall, were what Maxson described as “beautiful”.

The Capitol Christmas Tree traveled 4,500 miles from the Stanislaus National Forest and is decorated with more than 3,000 handmade ornaments. The tree will remain on display through January 1st.