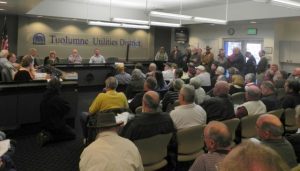 A public hearing started at 9am and lasted nearly three hours. Around 120 were on hand, and everyone that opted to speak voiced out against the rate plan.

Many said that T.U.D. administrators are paid too much, and others threatened to recall any board members that vote in favor.

It was announced that a formal vote on the rate plan will be during next Tuesday’s regularly scheduled T.U.D. meeting.

There are six tiers of rate increases proposed, and it is designed to close a $2 million deficit. For example, the minimum monthly service charge for treated water customers would go from the current $27.06 to $40.64.

It would take a majority vote of the Board of Directors (three) to approve the new rates. Letters were sent out to T.U.D. customers a couple of months ago announcing the plan, and anyone wishing to submit a formal letter of protest has until 4pm today to do so.

After hearing from the community this morning, it appeared that there may not be enough Board votes to pass the rate increase. Board member Ralph Retherford, who has been a vocal opponent of the rate hikes, stated at the end of the meeting, “I think there is a lot of sentiment on the Board to send this back for reconsideration.” At that point those still in attendance started cheering.

It is not immediately known what the revisions could include. Some customers in attendance expressed a willingness to support a smaller rate increase, if it is accompanied by things like reductions in employee pay and/or benefits.