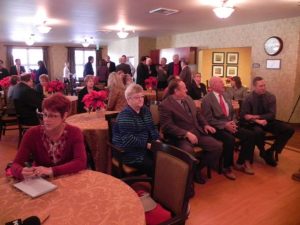 Sonora, CA – Avalon Care Center held a ribbon cutting ceremony at noon today for their new addition to the building on Greenley Road in Sonora. Tuolumne General Hospital has finished transfering 37 residents to the facility as it closes.

Avalon has hired 15 of Tuolumne General Hospital staffs’ members including six dietary aids, eight nurses and one social worker to provide care at the expanded facility.

Avalon CEO Dr. David Dangerfield stated, “We are very pleased with the way in which the facility has developed.  Both in terms of its attractiveness, but also just the feel that’s here. It’s a wonderful working condition for our staff who then can provide that love.”

There were aproximately 50 in attendance including representatives from Congressman Jeff Denham and Senator Tom Berryhill.

Avalon is a group of related companies that provide health care in several states including 10 facilities in California.