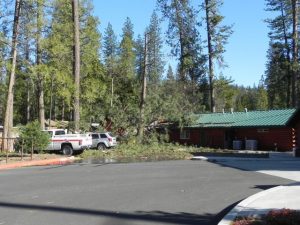 Twain Harte, CA — One of three communications towers near Cedar Ridge on Mt. Elizabeth has fallen on a power line impacting AT&T cell coverage in the Twain Harte area.

AT&T Spokesperson Dan Newman states, “Power is out, so it is impacting coverage in the Twain Harte area, although all other sites have been fully restored.”

PG&E has been working on the down power line and is expected to finish by this evening. There was an FM antenna and some Mother Lode Internet antenna’s on the tower. Services have been rerouted as Tuolumne County continues to clean up from the December 1st windstorm.

Also included in the photos is a home in Twain Harte where photographer Scott Goebel said a woman was injured but “not too badly.” He submitted photos of the home and more photos of the trees that fell on the Twain Harte Calfire Station.