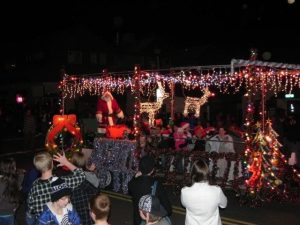 The parade in downtown Twain Harte began at 6 pm and featured around 25 holiday entries. Most of the downtown businesses were without power, and many ran on generators.

In Calaveras County, the 21st annual Christmas parade in Angels Camp starts today at 2 pm. The parade kicks off at St. Patrick’s Church and makes its way to historic downtown.
A parade tradition, Santa Claus will ride through on a fire truck. He’ll then head to the Calaveras Visitors Center where he’ll visit with children and sit for photos.

The Angel’s Camp celebration continues at 5 pm with carolers meeting at the lower end of Main Street. They’ll form a candle-lit procession to the Visitor Center’s and end the festivities with the lighting of the town Christmas tree.