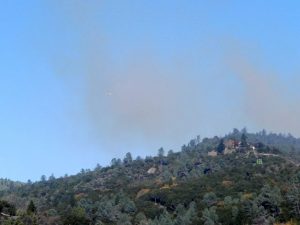 Sonora, CA — The fire at North Bald Mountain Road in the Big Hill region is estimated at 20 acres in size. According to CAL Fire’s Lisa Williams there is no containment yet. Air Attack and other units have been called into the area including a team from Napa which arrived this morning.

Sgt. Jeff Wilson of Tuolumne County Sheriff’s Department reports that no evacuations have been called for in Tuolumne County at this time as no structures are in immediate danger.

The fire at Phoenix Lake Road and Orchard Drive is still estimated at two to three acres and is not reported as threatening any structures.

Waste Management Manager Tom Teach says that they are closing the Cal Sierra transfer station off of Industrial Drive due to a small fire caused by the power lines and wind. The station is closed as of 1 pm and expect that they will reopen tomorrow.