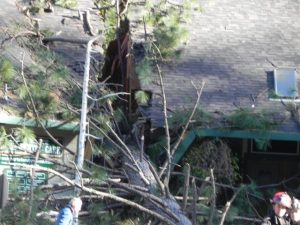 A 50 inch tree crushed a home in the Cedar Ridge area of Tuolumne County. A woman in the home was pinned down by debris and was extricated by Cal Fire and flown to the valley to treat major injuries.

The Twain Harte Family Dentistry office on Twain Harte Drive has been split in two by a 48 inch tree. All the office members and at least one patient were in the building at the time but escaped without serious injury.

Three large trees are down on the property of the Twain Harte CAL Fire Station. As seen in the photos the roots are very shallow, as the trees are between 150 – 200 years old.

Between 2,000 and 5,000 are still without power across the Mother Lode. Officials are recommending that people limit travel until the winds die down.

There are numerous other downed trees and power lines. The power outages have closed several schools, for the most current information go to our Schools Delays and Closures page.