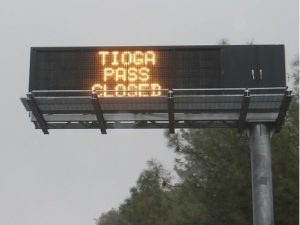 Yosemite Valley, CA– Because of high winds expected in the area, Tioga Pass and the Hetch Hetchy Road in Yosemite National Park will be closing at 8 pm.


A high wind warning has been issued for the Yosemite area starting tonight through Friday morning that may impact driving conditions along the roadway.

Park officials say there is the potential for very strong damaging winds with down trees and power lines and potential structure damage throughout the park. Visitorsare urged to use caution while in Yosemite National Park during this high wind warning.

Tioga Pass and the Hetch Hetchy Road will remain closed until further assessments can be made.