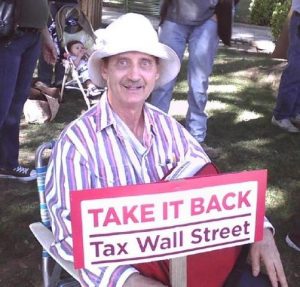 Poll results find 46 percent of the state’s residents identify with the movement and 49 percent do not.

Californians are also divided along party lines with nearly two-thirds of Democrats identifying with the Occupy protest movement, while fewer than one-quarter of Republicans do.

The poll found 58 percent agreed with the reason for the protests, though they differed over who to blame for the country’s economic problems. Less than half blamed the federal government, while a third blamed Wall Street.

This differs with the views of voters who do not sympathize with the movement who blame the Obama administration more than the Bush administration 47% to 37%. Survey results are from findings completed November 14-27 among 1,000 Californians registered to vote.

Locally, in a Mymotherlode.com poll from October 3-7, the majority of participants opposed the Occupy movement. The question asked was “Do you support the anti-Wall Street protesters? 65.53% (331) of participants said they were against the movement and 36.47% (190) were in favor.

This week’s “On the Street” question asks Mother Lode residents what they think of the Occupy movement . Click here to listen.