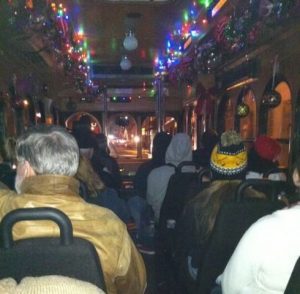 Tuolumne County Transit estimates that 400 people took a ride on one of the “Holiday Trolleys” that were running before and after Friday’s Sonora Christmas Parade.

Parking was outlawed on Washington Street this year to make for a better experience for parade goers. To help people get downtown, a free trolley service was offered from 3-5pm and 6:30-8pm by Tuolumne County Transit. Stops were made at the Junction Shopping Center, Mother Lode Fairgrounds and Columbia State Park.

Tyler Summersett of Tuolumne County Transit says 60 percent of the riders came from the Junction Shopping Center. Because of the high demand, three additional buses were called in to make Junction runs.

The 400 figure is the amount that was picked up and taken downtown. It is assumed that most everyone also traveled back on the trolley after the event.

At least three people were not pleased with the new “no parking rule” during the parade. That’s how many cars Police Chief Mark Stinson says his department was forced to have towed away. Stinson notes though that he heard mostly positive reviews about the new rule from members of the community.