Search Called Off For Waterfall Victims 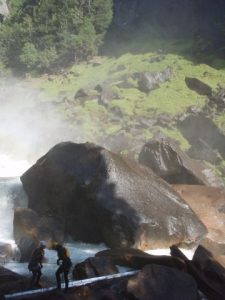 Yosemite, CA – Yosemite National Park is calling off the search for two young people that were swept over a waterfall last July while posing for a photo.

The Associated Press reports that an elite cadaver-searching dive team made one last effort this week, and park officials have now officially ended the search effort. Hormiz David, Ninos Yacoub and Ramina Badal went over the 317 ft. Vernal Fall after slipping on the rocks. The body of 22-year-old David was located by Search and Rescue personnel a few weeks later, but the other two remain missing.

Park Ranger Scott Gediman told the AP that the Park Service has spent around $60,000 searching for the remains of the three people killed.