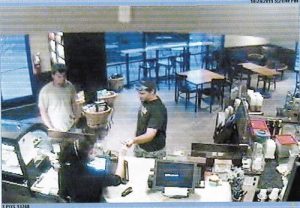 Sonora, CA — The Sonora Police Department is looking for two suspects shown in this surveillance photo.

Police Chief Mark Stinson says a 1998 Jeep Cherokee was stolen from a Sonora repair shop last month. Inside the SUV was a Starbucks gift card that the owner of the Jeep had registered online with the company. The owner tracked the stolen card and determined that it was used in Angels Camp, Los Altos and Sparks, NV before it ran out of money.

Chief Stinson says surveillance video from Starbucks shows two men using the card. Anyone with information on their identity and/or whereabouts is encouraged to contact the Sonora PD at 209-532-8141.

Chief Stinson says it is not immediately known if either of these subjects is responsible for the theft of the vehicle.

The missing Jeep has a California License 1VDC161, new Eagle aluminum rims and a Homer Simpson sticker on the left corner of the rear window.