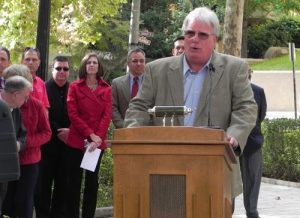 A celebration was held in Courthouse Park this morning to formally announce that Sonora will host Stage 4 of next year’s Amgen Tour of California.

“It is a great honor not only for the city and county, but also for all the residents and businesses,” said Bill Canning, Sonora Mayor. “It is going to take all of us to put this together. This is world class, so we’re going to show them what world class looks like from our vision.”

The Amgen Tour of California is the largest bicycle race in North America. It will start May 13 in Santa Rosa and ends on May 20 in Los Angeles.

“This is an incredible honor for Sonora and the entire Gold Country of California,” said Assemblywoman Kristin Olsen. “Over 100 cities applied to be a host city.”

As you can see in the video, numerous bicyclists were on hand to help Olsen make the formal announcement. Olsen stated that 1.6 million people view at least some portion of the tour in person, and more will watch on television.

That week of May will be busy for Sonora. The Mother Lode Roundup will end on May 13, and the Amgen Tour will arrive three days later. Stage Four will start in Sonora on May 16th and end in Clovis.