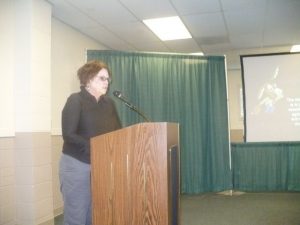 Friends of the Fair invited the public to discuss and gather ideas on how to keep the fairgrounds open.

The fair is operated under the state Division of Fairs and Expositions. Because of state budget cuts, Governor Jerry Brown eliminated funding for the 78 state fairs in July, a loss of $200,000 for the Mother Lode Fair.

Fair General Manager Jan Haydn-Myer says that the Mother Lode Fair is projecting a $70,000 budget shortfall next year. But fortunately there is $110,000 reserve that will be able to fund events in 2012.

While the fairgrounds hosts many popular events such as the Celtic Fair, Christmas Fair, Health Fair, Home and Garden Show and Mother Lode Round Up, their main revenue comes from the Mother Lode Fair in July.

Ideas suggested by local community members Al O’Brian, Ty Wivell and others included adding additional events at the fairgrounds, renting out the stables and other spaces for non event use.

Event suggestions include a car show, additional 4WD tractor pull, a Wild West Film Festival, a Valentines Sweetheart Ball and a wine festival. A chili cookoff and Harvest Fair are already tentatively planned for next year.

Another suggestion is to seek FEMA funding, as the Fairgrounds is the Emergency Evacuation Shelter in the area and was used in the Stanislaus Complex fire of 1987.

The friends of the Fair welcome your suggestions sent to friendsofmlfair-saveourfairgrounds@yahoo.com