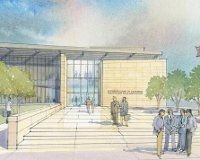 San Andreas, CA– A new courthouse for Calaveras County is now closer to becoming a reality.

The State Treasurer has recently issued bonds which will be used to finance the construction of the new Calaveras Superior Court facility in San Andreas.

The need for a new courthouse was recognized in 2007 when the project was identified as a statewide priority given the condition of the existing courthouse. However, construction could not start until there was adequate financing through the sale of state lease revenue bonds, which occurred last week.

The new courthouse will be located adjacent to the new county jail, which is currently under construction. The building, which will be owned by the State of California and managed by the Administrative Office of the Courts, will be built on property acquired from Calaveras County.

The County has advanced funds on behalf of the State for its share of initial infrastructure costs. As part of the agreement between the County and the State, the County will be fully reimbursed through the proceeds of the bond sale. The bonds will be repaid by fines and assessments imposed in criminal and traffic cases. No State or County General Fund money will be spent on the project.

The Courthouse will be approximately 44,600 sq. ft. and will include four courtrooms, enhanced security systems and a jury assembly room. According to Presiding Judge Douglas V. Mewhinney, the new courthouse will be more accessible and safer than the current facility the Court shares with the County.

“Currently inmates are transported into courtrooms through the same hallway used by the public, court staff, judicial officers and county officials,” said Mewhinney. “In the new court facility there will be separate, secure paths of travel for court staff, the public and inmates.”

The Administrative Office of the Courts anticipates it will award the contract for construction of the project by February 1, 2012 with ground breaking to follow as soon as weather allows. Construction is expected to be completed in the fall of 2013.

For more information on the Calaveras Courthouse Project, click here.