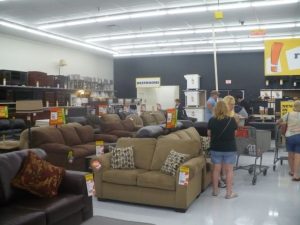 Sonora, CA – Big Lots held its grand opening ceremony at 9am this morning. Numerous local officials including Mayor Bill Canning, EDA Director Larry Cope, Supervisor Liz Bass, City Administrator Tim Miller and others were on hand to cut a section of the ribbon.

Sonora Elementary Principal, Pamela Vlach, accepted a check from the store for $2,500. Sonora Elementary was chosen in a random drawing of all the local schools. According to Vlach, the school plans to form a committee that will decide the best way to spend the donation.

There were 60 shoppers on hand for the ceremony that waited in line for grand opening bargains. According to District Manager Robert Burkhalter the store has hired about 50 employees.

“The store offers extreme value on consumable products, food, and Christmas type items,” says Burkhalter. “One of the greatest assets that we have in this location is we were able to bring a furniture department.”

There was a soft opening of the store last Thursday.

The discount retailer has 1,415 locations nationwide, and the Sonora store is one of 90 opening in 2011. Next door neighbor Joann’s Fabric and Craft will open on November 11th, and PetSmart also plans to open sometime within the next month.