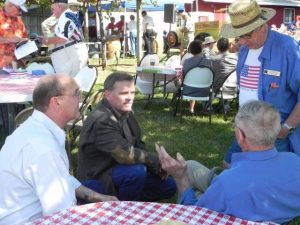 Political candidates were on hand Sunday at the annual barbeque hosted by the Tuolumne County Republican Central Committee.

Much of the focus was on jobs and economy.

“Ronald Reagan recognized that we had to rollback crushing regulations and taxes that were destroying the economy,” says McClintock. “He did so, and produced one of the most expansive economic periods in our nation’s history.”

McClintock plans to run for the newly drawn Congressional district that covers both Tuolumne and Calaveras Counties.

The event was attended by around 100 people and included a luncheon and raffle.