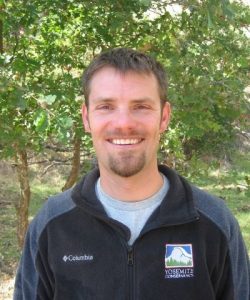 “Roger has a great passion for Yosemite,” said Mike Tollefson, Yosemite Conservancy president. “His nonprofit, management and programming expertise will support our efforts to enhance the visitor experience and inspire support for park programs and projects.”

Miller will manage several Conservancy programs. One major program involves the volunteers who work on habitat restoration projects and help more than 400,000 visitors annually at locations in Yosemite Valley, Wawona and Tuolumne Meadows.

“By connecting people to the park in meaningful ways, whether that’s by painting a watercolor of Yosemite Falls, volunteering to restore a meadow or snowshoeing in the Mariposa Grove of Giant Sequoias, we create memories that translate into stewardship and support,” said Miller. “I’m excited about working with the Yosemite community.”

Prior to working with the Conservancy, Miller had his own consulting company, Leadership & Fund Development Consulting, which helped nonprofits and socially responsible businesses to enhance their fundraising and administrative capabilities.