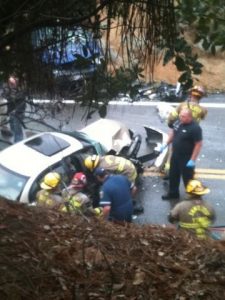 Sonora, CA– Four people were injured in a vehicle accident yesterday in Sonora.

The CHP reports that at around 4:40 pm, 20-year-old Caroline Walsh of Jamestown was driving her 1998 Saturn on Phoenix Lake Road, south of Longeway Road.

Amy Kimbro, 41 of Mariposa, was traveling in her 2003 Subaru just south of Walsh. As both drivers approached a curve in the road from opposite directions, Walsh was driving at an unsafe speed for the rainy conditions. She lost control of her vehicle and traveled across the solid double yellow lines and into the northbound lane where she collided head-on with Kimbro.

Walsh suffered major injuries and was transported by helicopter to Doctors Hospital in Modesto.  Kimbro and her two passengers were transported by ambulance to Sonora Regional Medical Center for minor injuries.