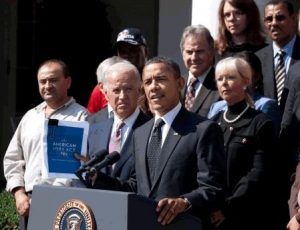 President Obama was Monday’s KVML “Newsmaker of the Day”. Here are his words:

“Over the last few weeks, I’ve been making the case that we need to act now on the American Jobs Act, so we can put folks back to work and start building an economy that lasts into the future.


Education is an essential part of this economic agenda. It is an undeniable fact that countries who out-educate us today will out-compete us tomorrow. Businesses will hire wherever the highly-skilled, highly-trained workers are located.

But today, our students are sliding against their peers around the globe. Today, our kids trail too many other countries in math, science, and reading. As many as a quarter of our students aren’t even finishing high school. And we’ve fallen to 16th in the proportion of our young people with a college degree, even though we know that sixty percent of new jobs in the coming decade will require more than a high school diploma.

What this means is that if we’re serious about building an economy that lasts – an economy in which hard work pays off with the opportunity for solid middle class jobs – we had better be serious about education. We have to pick up our game and raise our standards.

As a nation, we have an obligation to make sure that all children have the resources they need to learn – quality schools, good teachers, the latest textbooks and the right technology. That’s why the jobs bill I sent to Congress would put tens of thousands of teachers back to work across the country, and modernize at least 35,000 schools. And Congress should pass that bill right now.

But money alone won’t solve our education problems. We also need reform. We need to make sure that every classroom is a place of high expectations and high performance.

That’s been our vision since taking office. And that’s why instead of just pouring money into a system that’s not working, we launched a competition called Race to the Top. To all fifty states, we said, “If you show us the most innovative plans to improve teacher quality and student achievement, we’ll show you the money.”

For less than one percent of what we spend on education each year, Race to the Top has led states across the country to raise their standards for teaching and learning. These standards were developed, not by Washington, but by Republican and Democratic governors throughout the country. And since then, we have seen what’s possible when reform isn’t just a top-down mandate, but the work of local teachers and principals; school boards and communities.

That’s why in my State of the Union address this year, I said that Congress should reform the No Child Left Behind law based on the same principles that have guided Race to the Top.

While the goals behind No Child Left Behind were admirable, experience has taught us that the law has some serious flaws that are hurting our children instead of helping them. Teachers are being forced to teach to a test, while subjects like history and science are being squeezed out. And in order to avoid having their schools labeled as failures, some states lowered their standards in a race to the bottom.

These problems have been obvious to parents and educators all over this country for years. But for years, Congress has failed to fix them. So now, I will. Our kids only get one shot at a decent education. And they can’t afford to wait any longer.

Yesterday, I announced that we’ll be giving states more flexibility to meet high standards for teaching and learning. It’s time for us to let states, schools and teachers come up with innovative ways to give our children the skills they need to compete for the jobs of the future.

This will make a huge difference in the lives of students all across the country. Yesterday, I was with Ricky Hall, the principal of a school in Worcester, Massachusetts. Every single student who graduated from Ricci’s school in the last three years went on to college. But because they didn’t meet the standards of No Child Left Behind, Ricci’s school was labeled as failing last year.

That will change because of what we did yesterday. From now on, we’ll be able to encourage the progress at schools like Ricci’s. From now on, people like John Becker, who teaches at one of the highest-performing middle schools in D.C., will be able to focus on teaching his 4th graders math in a way that improves their performance instead of just teaching to a test. Superintendents like David Estrop from Ohio will be able to focus on improving teaching and learning in his district instead of spending all his time on bureaucratic mandates from Washington that don’t get results.