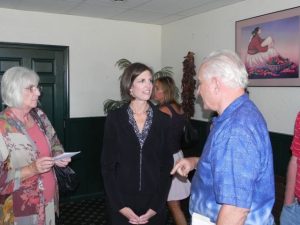 Sonora, CA — Assemblywoman Kristin Olsen says the legislature needs to make it easier for employers to do business in the state.

Olsen, a Republican, spoke to business leaders at a Thursday afternoon luncheon hosted by the Tuolumne County Chamber of Commerce. “We have 550 agencies, boards and commissions in California, and that is outrageous,” says Olsen. “We need to eliminate some outright, and then send others through a review process to find out if they are really meeting goals and objectives.”

Olsen praised the state of Texas for having only around 100 boards and commissions.

Olsen announced that a group of Tuolumne and Calaveras County leaders hoping to encourage the Amgen Tour of California to travel along Highway 49 held its first meeting Wednesday. Olsen says she is optimistic that the tour will travel through the foothills next year.

Thursday’s luncheon was held at the Peppery Restaurant. In the video Olsen gives her opinion of the budget that was signed by Governor Brown in hopes of closing the $26 billion deficit.