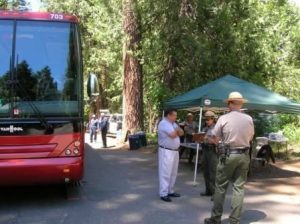 The inspection last Friday and Saturday, was planned in support of the Commercial Vehicle Safety Alliance’s Brake Safety Week.

“Operation Airbrake” ran from September 11-17th and its goal was to ensure braking systems of commercial vehicles, including buses, are maintained properly and in good working order. As part of the week long campaign, the CHP’s Commercial Unit organized a bus inspection in Yosemite Valley.

The location was selected because nearly every tour bus that enters Yosemite Valley is required to drive on state highways or county roadways within the Central Valley.

Participating agencies included the National Park Service, CHP, and inspectors from the Federal Motor Carrier Safety Administration. In order not to inconvenience Yosemite guests, the inspections were conducted while passengers were on foot visiting the Park.

In most cases on-site repairs were made or replacement buses or drivers were immediately dispatched to the scene.

The CHP says it plans to conduct more unannounced tour bus inspections in the future.