Proud To Be American 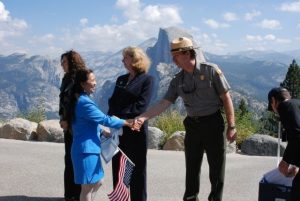 Park officials say this is the third Naturalization Ceremony the park has conducted at Glacier Point.

Officials from the U.S Citizenship and Immigration Services from Washington, D.C, San Francisco, and Fresno, joined Yosemite officials to conduct the ceremony.

The event also commemorates Citizenship Day and Constitution Week, which honors the many contributions of naturalized citizens.

The diverse group of thirty-three people came from around the world, including Mexico, Fiji, Cambodia, Russia, Guatemala, and many others.