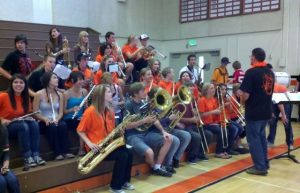 Tuolumne, CA — Tonight’s homecoming football game at Summerville High will be special for the generations of families that have attended the school.

Principal Dave Urquhart says this year’s homecoming festivities have a centennial theme. “It’s amazing to me that the school has been around for 100 years,” says Urquhart, who has been at Summerville for the past 27. “There have been so many good things that have happened at this school, and there’s such great community support for the school and what we do.”

Dick Thorstead, who was Superintendent in the 1970’s, 80’s and 90’s will be an honorary guest at tonight’s game. There will be fireworks shot off throughout the evening, notably when the homecoming queen is crowned during halftime.

Tonight’s game versus Denair will be aired live on 93.5 KKBN. Coverage will begin at around 6:30pm. Meanwhile, the Sonora High versus Calaveras High matchup will air live on Star 92.7.