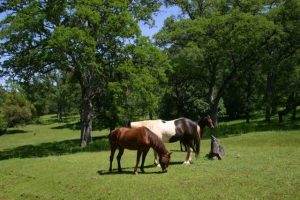 The horses at Kennedy Meadows Resort and Pack Station have acquired the EHV-1, according to owner Matt Bloom.

“UC Davis has been working with us and they just came up and did temperatures and blood samples on about 150 head,” said Bloom.  “We haven’t had any new cases in three days, so we think we pretty much have it isolated. They’re quarantined.”

According to the California Department of Food and Agriculture, there have been over 20 confirmed cases of EHV-1 in California in 2011. The recent cases at Kennedy Meadows are the first to be confirmed in Tuolumne County.

The disease poses no threat to people, but it is easily spread among horses, because it can be airborne and transmitted by touch or by sharing feed, brushes, bits and other equipment.

Raquelle Van Vleck of Rehorse Rescue Ranch in Jamestown says with the recent confirmation of EHV-1 in Tuolumne County, she is being cautious.

“We’re basically locking down our facility,” said Van Vleck. “No outside animals are allowed to come in. Anybody who has horses who could have potentially been exposed to the virus, we’re not going to let them in.”

In May, the California Department of Food and Agriculture reported 10 horses in Kern, Placer, Stanislaus, Amador and Napa counties to have confirmed cases of Equine Herpes.

The infected horses were among 500 that attended the National Cutting Horse Association Western National Championships in Ogden, Utah, in late April and early May.

For more information on the Equine Herpes Virus , click here.