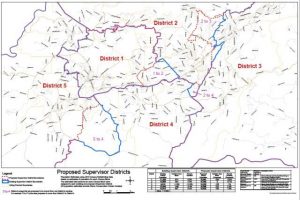 Sonora, CA – The population has shifted in areas of Tuolumne County.

To address the changes, the county is proposing changes to the Supervisorial boundaries. It will be the focus of a Public Hearing next Tuesday during the Supervisors meeting.

968 people would move from District One over to District Two. Their residences are located between Phoenix Lake Road and Highway 108, up to the lower portion of Ridgewood.

1,231 residents currently in District Two would become part of District Three. They are in an area east of Twain Harte and north of Longeway Road.

194 residents would move from District Two over to District Four. It is the area north and east of Soulsbyville Road and includes most of Monte Grande Heights.

388 residents would go from District Five to District Four. It includes all of the Mountain Springs community, and includes the southern portion of Cuesta Surena.

The districts are redrawn every 10 years. The County’s population is around 55,000.