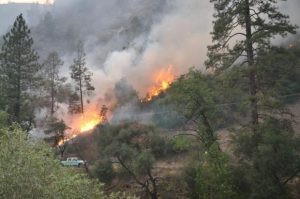 According to the Forest Service, the wildland fire that began Thursday in the Merced River Canyon near Yosemite, has burned 4,626 acres and is 35% contained. The fire is not expected to be contained until Sept. 9th.

Officials say good progress has been made so far with nearly 1,000 firefighters on scene. Local CAL Fire units including air attack from Columbia have been assisting with this fire as well as fire crews from the Stanislaus National Forest.

Cedar Lodge, Incline and local Merced River Canyon Campgrounds have been evacuated. Rancheria is under mandatory evacuations and Old El Portal, and Yosemite West have been advised to prepare for evacuations.

Highway 140, from the Foresta Bridge west remains closed. There is currently no estimated time on when the highway will re-open.

The Motor Fire reportedly started after a motor home caught fire near Highway 140 and Incline Road.