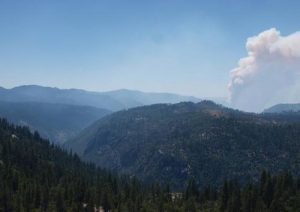 Yosemite Valley, CA– Drift smoke from a fire burning near Yosemite National Park is visible in the Mother Lode this afternoon.

CAL Fire says a motor home that caught fire sparked a vegetation fire that is now burning on both sides of the Merced River and has consumed over 100 acres. CAL Fire crews are assisting Sierra National Forest crews in battling the blaze.

The CHP also reports that Highway 140 into and out of Yosemite National Park is closed due to the fire. The highway has been closed between Foresta Road and the Cedar Lodge.

Visitors in Yosemite will have to exit the park via Highway 120 or 41.  There is no estimated time on when the road will reopen.