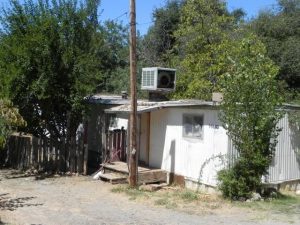 Jamestown, CA — The Tuolumne County Supervisors have denied an appeal by the property owner, so a substandard home in Jamestown will likely be demolished.

The mobile home located at 10636 7th Avenue is owned by Stewart Hatler. The building was inspected in May by the county’s Building and Safety Division and the Fire Department. County documents show that they found broken windows, roof damage, bullet holes in the siding, an improperly installed water heater, accumulation of garbage, apparent rodent infestation, an improper electrical subpanel installed in a bedroom, a non-functioning heater, and extension cords used as permanent wiring. There were also questions about whether the owner has proper permits for the mobile home. Additionally, an RV was allegedly parked on the premises and illegally being used as a separate dwelling.

The County decided to issue a final Abatement Order requiring that the mobile home be demolished and the debris removed, if needed repairs are not made within 45 days. Hatler filed an appeal to the Supervisors, but it was denied Tuesday with a 5-0 vote. If he fails to act, the county plans to demolish the property and send him the bill. It is estimated to be around $8,000.

The house has been serving as a rental unit.