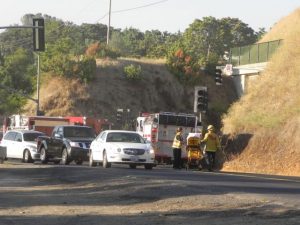 Sonora, CA — An unidentified man was life-flighted to Modesto this morning following a rollover accident on Highway 108.

The CHP reports that the man was traveling westbound when he crossed the double yellow lines and nearly hit numerous oncoming vehicles. He then lost control of his pickup truck and it overturned several times while going down an embankment near the intersection of Washington Street.

In the process of coming to a stop, the truck knocked out the power supply for the nearby traffic signals. Officials are still on scene making repairs. The accident was reported at around 7:30am.

The CHP notes that it was not a D.U.I. accident. More information is expected to be released later today.