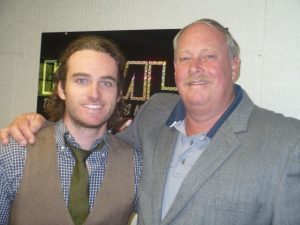 Twain Harte, CA — Businesses are hoping that next month’s Film Festival in Twain Harte will provide a little boost to the local economy.

The event will draw film goers and industry officials to the Mother Lode during the second weekend of September. The event is being put on in cooperation with the Twain Harte Chamber of Commerce, and the Festival Directors are Roger Haughton, Margie Lang and Zack Gold.

Haughton and Gold are Friday’s KVML “Newsmakers of the Day”.

Haughton notes that the idea for the festival got off the ground when he and others were looking for ways to help the Twain Harte community following a hard winter. He notes that business was slow for a few months partly due to prolonged power outages, some lasting for 4-5 days.

Gold, who is an L.A. based actor, says the event has caught the eye of many in Hollywood, as 215 films have been submitted for consideration. They are all independently produced, and have a small budget. “For many of these films it will be the West Coast premiere, and for some a world premiere,” notes Gold.

Organizers say most of the films selected will be “family friendly.” It is noted that some of the event proceeds will benefit Connections Academy at Summerville High School, and a select group of students may have the opportunity to show their work at the event.

One of the festival speakers will be Richard Riehle, who is known for his role in the 1999 film Office Space. Jeffery Weisman is scheduled to speak, who played George McFly in Back to the Future II and III. He also played Teddy Conway in the Clint Eastwood film Pale Rider. Festival organizers are also in talks with Jack McGee. McGee recently played the father and boxing coach in the Mark Wahlberg film “The Fighter.”