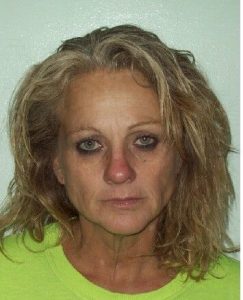 According to the Tuolumne County Sheriff’s Office, on July 11th, the Sheriff’s Office took a burglary report at the vacant restaurant at Yosemite Junction. The back door had been pried open and an air conditioner and a compressor had been stolen.

Monday, suspects were seen disconnecting another air conditioner from the roof of the same building. Sheriff’s Dispatch then received a call yesterday regarding two males attempting to remove that air conditioner at around 7:20 pm.

The reporting party said that the suspects had left the area and that he was following them. The suspects eventually stopped at C&C Mini Mart in Jamestown.

The reporting party identified Morgan and Crook as the same people he had seen at the old restaurant just prior to the original burglary.

The suspects were found to be in possession of a small amount of methamphetamine. Deputy Speers also searched the suspect’s truck and found billy clubs, pry bars and other miscellaneous hand tools. A mound of jewelry on the passenger floor board and more jewelry in the glove compartment was also found, along with over 40 receipts for more than $3000 from Jim Newell’s Iron and Metal Recycling in Modesto and Mid Valley Iron and Metal in Ceres.

“It’s important that people understand that this incident is significant for two reasons,” said Sgt. Jeff Wilson. “First it would probably not have ended positively if the reporting party, a citizen of Tuolumne County, had not taken an active role. Second, the theft of heavy metals in all forms from pasture sprinklers to roadside guard rails, has become a reliable way for criminals to support themselves and their drug habits. This support can be cut off by better regulations at recycling centers.”