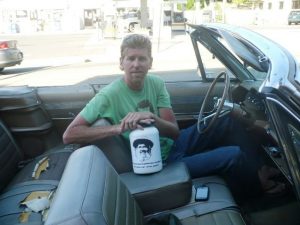 Alden Olmsted continues his quest to save seventy California State Parks from closure within the next year.

Olmsted was Thursday’s KVML “Newsmaker of the Day”.

Nevada City resident Alden Olmsted believes the 70 California State Parks set for closure by July 2012, including Railtown 1897, can be saved if each California resident simply donated one dollar. Although that would be well over $33 million, his goal is to raise at least $11 million.

“Before Memorial Day, I set up a website and tried to do some stuff by email and by phone,” said Olmsted. “But I realized I’m probably going to have to just get in my car and personally set up the donation buckets. So I started driving around to the parks.”

Olmsted is the son of the late John Olmsted who created several California State Parks. Each “Save Our State Parks” donation bucket features the face of his father.

Olmsted says he’s visited about 40 parks on the closure list so far and has put nearly two thousand miles on his car. In the past two months, he’s collected over $20,000.

Last June, Olmsted says he spoke with Railtown Park Superintendent Kim Baker and was very impressed with the park and its rich film history.

“I was able to leave a bucket for donations at the Visitor Center,” said Olmsted. “So for all Jamestown, Sonora and Angels Camp residents, you can donate right there in Jamestown. And you know that there’s no overhead. I’m using my own dime, my own gas money. 100% of this money is going in a fund and will be given to these parks.”

Olmsted says he’s not sure if he will be able to visit all 70 parks on the state’s closure list, but will do his best to try.

“In just a few weeks, on September 1st is when I’m hoping to present Governor Brown with a check because that’s when he said that some of the parks might start closures,” said Olmsted. “I’m going to insist that we just can’t close any these parks.”