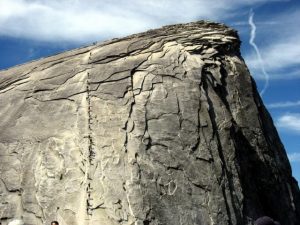 A woman has died in Yosemite after falling from the cables leading to Half Dome.

Park officials report that 26-year-old Hayley Laflamme of San Ramon fell approximately 600 ft. yesterday. Park Ranger Kari Cobb says weather may have played a factor in the accident. A severe lightning, thunder and rain storm was present in the area of Half Dome for much of the morning and early afternoon. The accident was reported at around 12pm. Only 20 people were on the Half Dome cables at the time. Laflamme had been descending at the time of accident.

The last hiker who had died on Half Dome was Majoj Kumar, also from San Ramon, back in June of 2009.