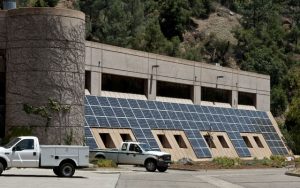 “The collaborative effort to design and build this system has come to fruition and we are extremely proud of the results,” said Neubacher. “We are committed to being a leader in renewable energy and this project exemplifies our efforts.”

The project was funded through the American Recovery and Reinvestment Act and cost $5.8 million. Construction of the system was completed in February 2011 and the interconnection agreement with PG&E was signed in late June 2011.

The El Portal Maintenance and Administrative Complex is located at the western edge of Yosemite National Park adjacent to Highway 140.