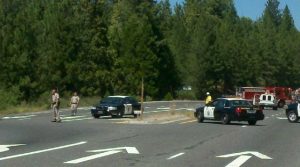 Shortly after 1 pm on Highway 120 near Chinese Camp, the CHP reported that a pickup truck was fully engulfed and the fire spread to ¼ acre of nearby vegetation.

About 20 minutes later, another vehicle fire was reported in Twain Harte on eastbound Highway 108 at Twain Harte Drive. CAL Fire says an RV caught fire and the fire spread to ¼ acre of nearby vegetation.

Multiple resources assisted with both of these fires including air attack from Columbia.