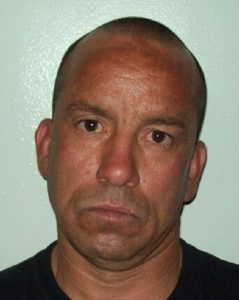 According to Sheriff’s Office spokesperson Jeff Wilson, a report was made Monday regarding a 200 foot section of guard rail valued at approximately $2000 missing from Shawmut Road.

After the Sheriff’s Department conducted an investigation this week, Deputy Paul Speers discovered two men this morning at around 2 am, near the section of the missing rail. He also noticed another section of rail had been unbolted from its posts and was laying on the ground. Speers says he had checked the area earlier and knew the rail was still on its posts at that time.

While Deputy Speers questioned the suspects, Greg Curtis Troedson, 47 of Denair, and Darrel Kevin Deaton, 42 of Modesto, he also noticed a tool bag, a pry bar and a set of channel locks in the bed of their truck. After searching the inside of the truck, two receipts from a metal recycling plant in the central valley were also found.

Although Troedson denied having any connection with the guard rail theft, he was arrested when Deputy Speers found one of the square nuts from a guard rail bolt in his pocket.

Deaton was also arrested. Both men were booked at County Jail on charges of conspiracy and attempted grand theft.