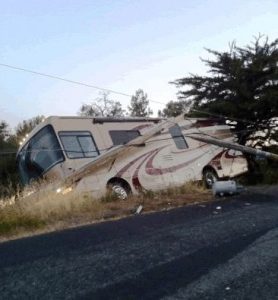 Twain Harte, CA — A man that allegedly crashed a stolen motorhome into a power pole last week near Twain Harte has been arrested.

Sgt. Jeff Wilson of the Tuolumne County Sheriff’s Office says that 30-year-old Ruben Gene Williams has been arrested in Modesto, where he was also wanted as a parolee at large.

Tuolumne County deputies were engaged in a short pursuit on July 20 that ended at around 3:58am. Williams allegedly crashed the stolen vehicle into a pole near the intersection of Highway 108 and Oman Drive, near the west entrance to Twain Harte. He then took off running and could not be located.

The motorhome had been taken from a nearby residence. The collision caused nearly 500 PG&E customers to go without power.