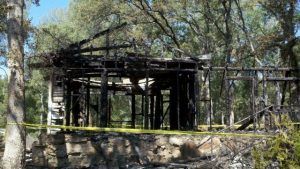 Sonora, CA — The City of Sonora Fire Department believes that people may have been either inside or nearby the home on North Highway 49 when it started on fire Wednesday night, but no suspects have been located.

“It was an abandoned structure that was fully involved when we arrived,” says Captain Todd McNeil. “We don’t have a definitive cause, but preliminary indications are that there was transient activity in the area, which possibly could have led to the ignition.”

The fire was reported at 9:58pm and fully contained by 12:48am. It was near the O’Hara Drive intersection. The City of Sonora Fire Department received assistance from surrounding fire districts, including Tuolumne County Fire, CAL Fire and Columbia College Fire.